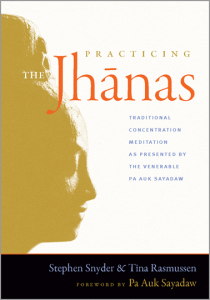 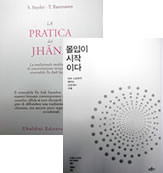 Shambhala says, “This is a clear and in-depth presentation of the traditional Theravadin concentration meditation known as jhana practice, from two authors who have practiced the jhanas in retreat under the guidance of one of the great living meditation masters, Pa Auk Sayadaw. The authors describe the techniques and their results, based on their own experience.”

“Stephen Snyder and Tina Rasmussen know what they write about in this book through their own direct experience as dedicated yogis. This book serves as a bridge for Westerners, as a conduit to the traditional teachings of the Buddha.”—Venerable Pa Auk Sayadaw

“Practicing the Jhanas is a wonderful addition to our understanding of concentration practice. Tina Rasmussen and Stephen Snyder draw on a wealth of personal experience to clearly elucidate and fine-tune this profound meditative path. Highly recommended.” –Joseph Goldstein, author of One Dharma and A Heart Full Of Peace

“Clear and in-depth. Practicing the Jhanas explains difficult concepts and ideas in an accessible format and enriches the reader’s understanding of meditation.”—Yoga Magazine (UK)

“This is a unique road map to the extraordinary and transforming states of mind known as the jhanas. As a psychologist and as a practicing Buddhist, I recommend this book wholeheartedly.”—Rick Hansen, PhD, co-author of Buddha’s Brain: The New Neuroscience of Happiness, Love, and Wisdom

“This book will be of interest to any dedicated meditator, regardless of their style of practice. It provides a valuable contribution to the growing understanding of jhana and its important place in Buddhist meditation.”—Richard Shankman, author of The Experience of Samadhi

The original book, Jhanas Advice from Two Spiritual Friends, was purchased by people in 31 countries on six continents. The Shambhala version contains one additional chapter on “First Sit to First Jhana”, as well as an expanded section on Purification of Mind.

Practicing the Jhanas is now also available in e-reader format, at Amazon.com, Barnes & Noble, and Google. 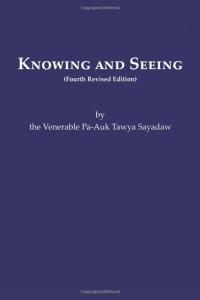 by the Venerable Pa-Auk Tawya Sayadaw

Buy it on Amazon
This overview of the Buddha’s teaching, as presented by Ven. Pa Auk Sayadaw, is now available at cost via Amazon.com. Any proceeds in excess of production costs are donated to Pa Auk Monastery in Burma. Many thanks to Ted Weinstein and Michael Nagy for making it possible for all of us to get a bound copy of this seminal book, rather than having to download it via PDF file. The book is beautifully done and the quality is wonderful. An essential resource for people interested in both the samatha and vipassana practice as presented in this lineage.

Knowing & Seeing (4th Edition) presents a series of talks and question & answer sessions at a meditation retreat by the Venerable Pa-Auk Tawya Sayadaw, abbot of the Pa-Auk Forest Monastery in Myanmar (Burma). These sessions present the Buddha’s teachings on the traditional Theravadan concentration meditation known as jhana practice. Based on the original Pali suttas, the Visuddhimagga, and later commentaries, the Sayadaw teaches yogis, step by step, how to attain the stages of mental purification and vipassana knowledge. Pa-Auk Forest Monastery is a Buddhist monastery in the Theravada tradition, with emphasis on the teaching and practice of both samatha (tranquility) and vipassana (insight) meditation.

These articles are transcripts of an interview of Tina and Stephen by Vince Horn,  founder of Buddhist Geeks.

In this episode Stephen and Tina share the progressive practice that they did with Pa Auk Sayadaw, which includes many traditional practices from the Pali Canon. They also make many traditional distinctions, including the distinction between three different types of concentration–momentary, access, and absorption–and the way that they distinguish between these types of concentration. They also share some of the traditional benefits that come from concentration practice, and frame the jhanas not as much as something to attain, but rather as a by-product that arises from purifying the mind.

The Jedi Mind Training of Concentration

In this episode Tina and Stephen share the deeper purpose of concentration practice, which isn’t to attain any particular states, but rather is to serve as a purification of the mind stream, what they describe as the “thinning of the me.” They describe the 8 jhanas as states that progressively reach toward the unconditioned, with the 8th jhana, neither perception nor non-perception, as a realm that is as close as you can get to the unconditioned without being itself unconditioned. From there emerges no-thingness, then consciousness, space, and finally form itself. They tell their students that orienting toward the unconditioned, or “the force”, is a type of jedi mind training. And we thought we were geeks!

We complete the discussion by exploring the vipassana technique of Pa Auk Sayadaw, which is a powerful way of exploring materiality, mentality, and dependent origination, using the jhana states as a super-powered basis for that investigation. Tina and Stephen share their understanding of this practice, and how it leads to liberating insight and awakening.

A Honed and Heavy Axe: Samatha and Vipassanā in Harmony

This fascinating article is written by Ajahn Chandako, who is an American monk of 30+ years in the Ajahn Chah lineage, and abbot of the Vimutti Buddhist Monastery in New Zeleand. In this provocative article, he highlights the history of the practices, dispells some misunderstandings about the samatha practice, and describes how the two practices are intended to work in harmony on the path to liberation. Click the button below to download the article.